More than anything else, Dumbledore has a deep capacity for love, frequently reminding Harry that love was the greatest magic of all. Dumbledore believes in the good in everyone and insists on giving second chances. The greatest example of this is Dumbledore’s relationship with Severus Snape, in whom Dumbledore is willing to place a considerable amount of faith because he showed remorse. Dumbledore is highly perceptive and emotionally intelligent; his knowledge of a person’s true personality goes beyond simply being a good judge of character. This is never more apparent than in his complex insights into Voldemort’s psyche, which he pieces together with Harry to deduce where Voldemort’s horcruxes are hidden.

However, in spite of Dumbledore’s many extraordinary qualities, he was no saint. According to Rowling, “Although Dumbledore seems to be so benign for six books, he’s quite a Machiavellian figure, really. He’s been pulling a lot of strings.” In a 2005 interview, Rowling commented: “Immense brainpower does not protect you from emotional mistakes, and I think Dumbledore really exemplifies that.” Dumbledore’s greatest personality flaw, which he explained to Harry, was his desire for power. He eventually found that those best suited for power are those who do not seek it. When he and Gellert Grindelwald met each other, they made plans to enslave Muggles and re-establish wizards as the natural rulers of the world. However, Dumbledore was disillusioned of this fantasy after his sister Ariana Dumbledore was killed during a duel between himself, Aberforth Dumbledore, and Grindelwald.

Dumbledore was haunted by his sad family history. In particular, he was riddled with guilt over the circumstances surrounding the death of his sister. He felt enormous remorse for his selfishness and was tortured for the rest of his life by the possibility that he might have been the one who cast the spell that killed his sister. When he looked into the Mirror of Erised, he saw himself redeemed in the eyes of his brother and his entire family alive and together. 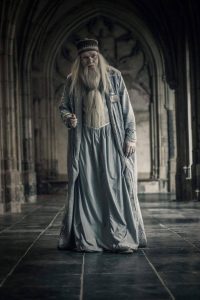 This website is about Dutch Dumbledore, a Dutch Cosplayer in his role as the beloved Professor  Albus Brian Percival Wulfric Dumbledore.

We are still building this website to it’s full form